It happens every year without fail: news announcements pop up about the Mayhem tour coming to town, and my ears will invariably perk up, until I realize they don’t mean THAT Mayhem, but the perpetually mediocre packaged tour with the energy drink sponsor. But every single time there’s that split-second of hopefulness, because let’s be honest, it would be a huge deal if the Oslovian band who was one of the main originators of black metal as we know it (hugely influential not only for the musical style but the overall aesthetic as well, and as famous for releasing some of the genre’s most highly-regarded landmark records as for the various controversies surrounding its members’ extra-curricular activities) was coming to town, right? Well guess what, Mayhem are coming to town.

It all started as a celebration of their debut LP (still universally regarded as the pinnacle of black metal), 1994’s De Mysteriis Dom Sathanas, which the current iteration of the group (which now consists of bassist Necrobutcher, the sole remaining founding member, though he had been separated from the band and replaced by — someone else — at the time the album was recorded and initially released; drummer Hellhammer and vocalist Attila Csihar, who have each been members for large portions of the band’s history, including taking part in that first full-length; and more recent additions Teloch and Ghul on guitar) began playing live in its entirety for the first time ever, during a European tour. That tour has continued adding additional trips to various parts of the world over the past couple of years, and at this moment Mayhem are recreating De Mysteriis Dom Sathanas on stages across North America.

This current expedition on this side of the ocean will actually be wrapping up in the very near future, but I’ll be including the remaining scheduled dates down in the comments section (along with a one-off visit set to take place next spring). But before we get there, I’d also like to share with you this recording that the band put out nearly a year ago, which originated way back at the beginning of this long series of commemorative tour dates. 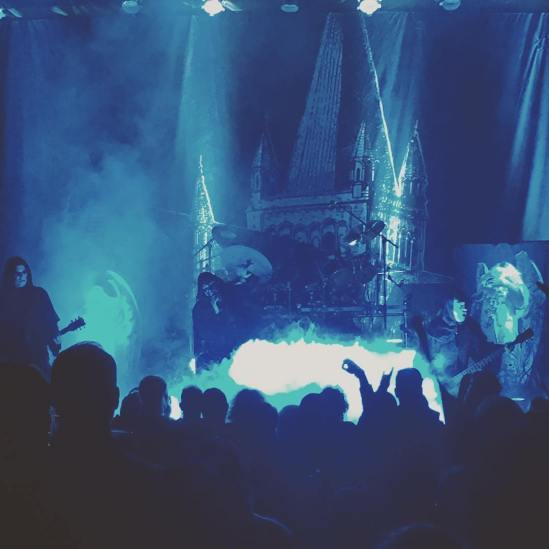 Recorded in mid-December 2015 at the Black Christmass Festival in Norrköping, and released as a live album and concert video one year later, De Mysteriis Dom Sathanas Alive captures Mayhem as they perform the classic album front-to-back for the very first time. Naturally, if you’ve somehow missed hearing the original version, it would be highly recommended that you check it out — purely for its historical significance if nothing else. At the time, Hungarian Csihar (brought in as a replacement for the band’s recently-departed vocalist) was a relative newcomer to the Scandinavian scene, and his understated performance on the album (including plenty of grunts and groans) was a bit different from what many of their local peers were creating. Furthermore, although black metal lore is rife with tales of demo tapes cobbled together in a dank record store basement, this album was actually created in Grieg Hall, home of the Bergen Philharmonic Orchestra — with a much clearer and spacious sound quality than one typically associates with the genre, particularly notable in the drum tracks. From the opener “Funeral Fog” through the title track at the end, the barely-restrained raw fury woven through the numerous memorable riffs, has resulted in these songs being identified as instant classics.

This new live version manages to remain true to the spirit and aesthetic of the original — maintaining the same “concert hall” reverb and grim atmosphere, the same frantic energy (some twenty-plus years later!), and also manages to strike a similar balance between clarity and rawness as found in the original recording — with the advances in technology over the past couple of decades they could have gone too far into cleaning up the sound, making it pristine but lifeless, but they could also have gone too far in the opposite direction as well, intentionally muddying and (as many modern black metal imitators are often wont to do) creating an artificial lo-fi vibe. Instead, each instrument stands out just enough (especially the vocals: while before they were mostly either buried by the music or seemed somewhat apart from the rest of the group, here Attila sounds like a prominent and rather commanding presence), while the overall sound is just dirty enough, to represent a fitting and worty tribute to this masterpiece of a record.