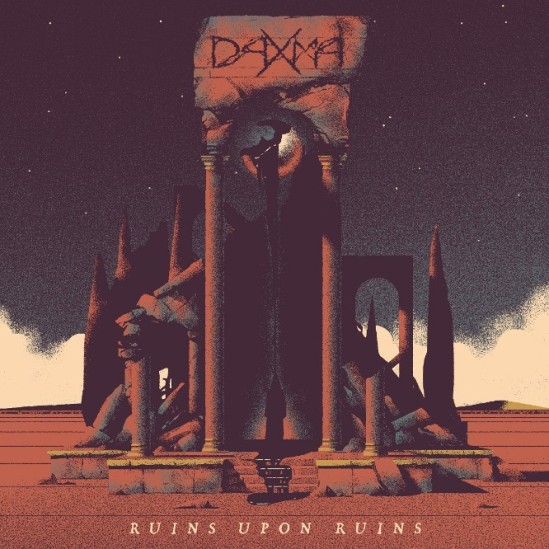 Hey! In case you were wondering, we still talk about music around here, too. Sometimes. This morning let’s dive into a fascinating two-track EP that emerged over the summer, from the Oakland (CA)-based post-doom/drone crew Daxma.

The band’s name is a homophone (or perhaps simply an alternate spelling) of dakhma, the towers built in Zoroastrian societies as a place to cast dead bodies, where first vultures and other scavengers, and then the sun and other elements, will ultimately cleanse and purify the bones. 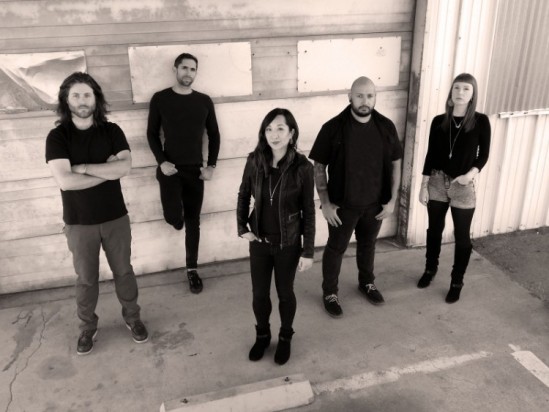 That’s pretty damn metal, right? But at the same time, if you really think about it, and really dig into it, it seems peaceful and almost even comforting at some level, doesn’t it? And there in a nutshell is Ruins Upon Ruins.

The first half of the EP is original composition “Minima Moralia”: fourteen minutes of protracted tempoes, jangly “post-metal” guitars and overdriven “epic doom” guitars alternating turns in the spotlight. The opus eschews vocals in favor of a solo violin threading its way through everything else. Sometimes droning, but sometimes melodic and lovely; primarly forlorn and bleak, but always with an underlying glimmer — however faint it may be.

On the flip side is “Landslide” — a classic track already famously (and needlessly) reproduced by Smashing Pumpkins, and others, but here reinvented to intriguing effect. The first time I heard this recording was while driving, with the windows open, and so mostly the Pallbearer-esque sustained guitar chords stood out (and little else). But in a few spots, an eerily familiar melody shone through — like something from a half-remembered dream, or like when you hear brief snippets of something from faraway and you know you should know what it is but just can’t quite seem to place it. Then eventually (probably stopped at a red light or something) the lovely, wistful singing coalesced into recognizible words — and at the same time, an electrified representation of that timeless Lindsey Buckingham fingerpicked ditty emerged, and it was a fairly shocking revelation.

Having grown up in a household where one parent absolutely revered Fleetwood Mac (and very much Stevie Nicks in particular), songs like this one were pretty foundational in my early existence, and I would be the first to admit that I am predisposed to dislike anyone brash enough to try and imitate them. There’s a commercial that keeps appearing on TV these days, perhaps you’ve seen it, advertising some video game or movie or something with a nauseating rendition of “The Chain” which I immediately end up blocking out from all of my senses, to the best of my abilities. So my very first knee-jerk reaction to realizing that this song “Landslide” was in fact that “Landslide” was a repellant one, the thought that I should hate this thing that is ruining something so treasured and beloved. But listening further, and listening repeatedly, that inner voice was swiftly silenced. In the previous paragraph I referred to this as a reinvention, but that isn’t entirely accurate: this is a loving and respectful homage, drawing out all the emotion (both the melancholy and the stoic resolve) of the original, while amplifing both.

See the Bandcamp widget below to stream or download Ruins Upon Ruins, or you can grab a copy on vinyl right here.