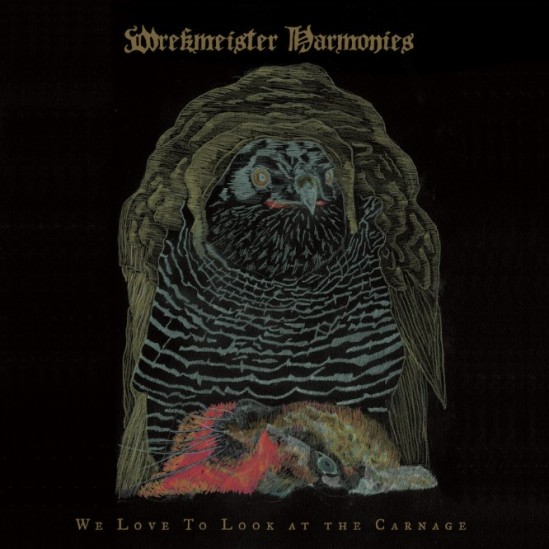 Wrekmeister Harmonies – We Love to Look at the Carnage (Thrill Jockey Records, 21 February 2020)

Hello there, readers. It’s been a little while since we’ve been in touch, I know. That sucks — and it makes very little logical sense. We’re coming up on the conclusion of a second full month of work-from-home quarantine, and with nearly two extra hours per day that formerly would have been spent driving to and from work (and with nowhere else to go, aside from the rare shopping trip for pandemic essentials such as bird food and wine) it seems like I should have plenty of time to spend listening to music and subsequently writing about it for all you fine folks out there. But as bizarre as it sounds, even when there’s nothing else to do, it sometimes feels like there’s less spare time than there used to be. Even though I can literally roll out of bed and throw on a random t-shirt en route to my desk chair a mere three feet away — well, to be honest, it’s probably more of a mental and emotional thing than an actual shortage of available time. Because things are so stressful now, and uncertain and confusing and scary and depressing.

However, a lack of engagement with hobbies or things that bring you enjoyment, due to a lack of motivation due to a general feeling of malaise, often has a tendency to continue spiraling further into deeper levels of depression. I know this very well from plenty of experience. And I am determined not to let this turn into another months-long mental health hiatus. So here is an album I’d like to share with you all today. I hope you enjoy it and I hope however dismal your day might be currently, that this may bring some amount of light into it. Please feel free to react in the comments section below or via any of the various Valley of Steel social media outlets linked either on the far right or the bottom of this page. Thanks, and stay safe out there!

We’ve covered Wrekmeister Harmonies albums twice before: here and here. Within the timespan between those two articles, the group had been distilled from an oversized collective of Chicago-based contributors, to the core duo of JR Robinson and Esther Shaw, who had relocated to the west coast. And present-day Harmonies are now headquartered in Brooklyn, although the pair had retreated to a cabin in the seclusion of (relatively) nearby Woodstock, when it came time to record their latest We Love to Look at the Carnage.

By and large, the new album is once again a stripped-down and minimalist affair: oftentimes little more than a mournful vocal melody with a bit of piano and gentle guitar or violin as a backdrop, occasional touches of percussion, and various other orchestral instruments. There may be some exceptions: the last two minutes of “Midnight to Six” and the midsection of “The Rat Catcher” may introduce a distorted guitar and the arrangements may become almost overwhelmingly crowded, just to name a couple examples; but minimalism and ambiance and a bleak expressiveness are primarily the name of the game here — from the distressing discordance of “Immolation” to the haunting beauty of “Coyotes of Central Park.”

But lest it come across as though this is a compilation of sad sounds for a sad time, there are certainly moments of optimism to be found. In fact, a cautious feeling of hope is essentially the central theme of the album, beginning with the title itself. Although it sounds representative of a rather depressing concept, here the idea of “looking at the carnage” refers to pondering the worst possible scenarios or outcomes, and taking solace in the thought that no matter how awful things may seem, it truly is much better than it COULD be. Despite having been written and recorded and released in advance of the state in which we all currently find ourselves, this turns out to be yet another example of a soundtrack ideally suited for the present time.

On the subject of us all doing what little bit we can to stay connected and look out for each other, a recent post on the band’s Facebook page offers suggestions regarding coffee and music and books, any of which may be beneficial to all of us right now.

We Love to Look at the Carnage can be streamed or downloaded, and also available on CD and vinyl, right here.