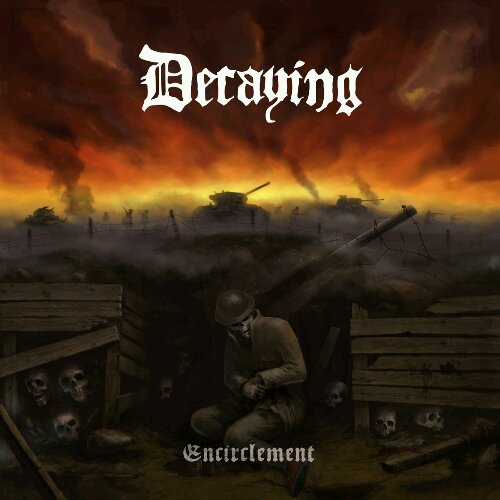 So remember way, way back in November, when this blog was still more or less in its infancy, I posted an announcement with details about Encirclement, the soon-to-be-released second album from Finnish death metal band Decaying?

If you missed that announcement, don’t feel bad — somehow I sort of let it slip away too. The January release date came and went, and I must have been distracted by something, because I didn’t actually get around to grabbing myself a copy of the album until just a few weeks ago. But it was definitely worth the wait, and I have listened to it countless times since then. And now, I’d like to share it with you.

Honestly, that first paragraph will be enough of a review for most people: Finland has built quite a reputation for having excellent quality metal, so as soon as you hear there is a new death metal album coming from that nation, your fingers are probably already itching to go click on that “order” button. But just in case you need just a little more convincing, keep on reading…

There have been plenty of death metal — and even more thrash — songs and albums that focus on nuclear weapons, and the instantaneous apocalyptic destruction they can cause. But if you really think about it, for someone to be completely annihilated in a split second, the whole thing would be over before you even knew it was happening. Just one huge burst of furiously explosive energy, and then nothing.

Usually, war isn’t really like that at all — as the saying goes, “War is Hell.” It’s long and dirty and miserable and quite possibly will suck your soul right out. Now, if THAT isn’t a fitting description for good old-fashioned death metal, I don’t know what is. No frilly melodies or pretty singing here, and no fancy jazzy nonsense either. Just nonstop coldness and suffering, hammering away at you until you can’t bear it anymore.

Encirclement centers around events from World Wars I and II; both of those conflicts certainly had plenty of long, drawn-out, periods of misery and agony, so it makes perfect sense to derive album material from there!

For example, the song “Operation Citadel” takes its name from the German offensive that was part of the Battle of Kursk in World War II. In July 1943, the German High Command ordered this operation, building up their troops and equipment along the eastern front and advancing upon the area of Kursk, Russia (then part of the Soviet Union). This ended up pretty poorly for the Germans, particularly since the amount of time they spent bringing in all the troops and equipment gave the Soviets plenty of time to figure out what was happening and to be prepared for a counterattack (which they then launched, between July and August, 1943). Having had plenty of advance notice (I haven’t seen the actual lyrics, but I did notice the song makes mention of Soviet intelligence), and also being so close to home (Kursk is only a few hundred miles away from Moscow), the Russian troops, tanks, and artillery vastly outnumbered what the Germans had to work with. However, throughout the entire battle (including the both the German offensive, and the Russian counterattacks), both sides suffered considerable casualties.

Then, “Battle of the Somme” is named for the World War I battle that occurred around the area of the Somme River in France, from July to November, 1916, between the Allied Forces (primarily British, British Commonwealth, and French soldiers) and the Germans. In all, over one million casualties occurred between the two sides, which represents the second-highest casualty total suffered in a battle in WWI, and the third-highest total in any military operation in recorded history. Referring to Somme, German officer Friedrich Steinbrecher had said, “The whole history of the world cannot contain a more ghastly word.”

“The Hell of Verdun” is another song named for a WWI battle. This one took place in Verdun, France, from February to December 1916, between the French and German armies. This was the fourth costliest battle in the war in terms of deaths and casualties. In May of that year, a French Lieutenant who was at Verdun had written in his diary, “I cannot find words to translate my impressions. Hell cannot be so terrible.”

I know you are here for the music, not for a history lesson, but I think it can be both interesting and helpful to give the music a bit of context. Reading about some of these terrible, tragic events definitely puts a new perspective on the brutality of this collection of songs. In fact, in light of the research I’ve done into the military history surrounding this album, I’ve found that the title itself, which comes from the name for a military tactic, can also be a very apt description of the music itself. Encirclement refers to the strategy of splitting an army into more than one unit, and approaching the defending army from multiple directions all at once; thus surrounding them and cutting off supply lines as well as any paths for retreat. The German plan for Operation Citadel, in fact, involved an encirclement of the Soviet army at Kursk. Likewise, Decaying seem to have adopted a strategy of encirclement in their attack on the listener: like the German blitzkrieg plan, they take everything they’ve got and march straight through, then circling back around in both directions to partially or wholly envelop the target until surrender is the only possible outcome.

Now, I hope I haven’t given the impression that this album is simply a monotonous barrage of pummelling from start to finish, because that isn’t the case at all. The ten songs included here total more than sixty minutes altogether (and if you disregard the two-minute instrumental opening track “Initiation,” the average track length is actually a little over seven minutes), and there is plenty of punishment for your ears over the course of that duration, but there is also enough variety to keep you interested, too.

A few songs (“Artillery Barrage,” and the first half of “Battle of the Somme,” for example) come across as pretty thrashy. These tracks both have a pretty tasty thrash-bassline going on, as well. Somewhere near the middle of “Somme” everything basically grinds down to a dirgey sort of doomination which lasts through the end of that song. “Conclusion” (the track that follows those two, and presumably referring to capping off that particular thread of subject matter, since it is in fact not the last on the album) also gets very slow and doomy for a bit (with some interesting bass parts during this part as well), then speeding back up to the medium-speed death tempo that predominates. “Public Enlightenment” also includes some pretty doomy riffs (there is one in particular that really stands out, which repeats throughout the song). Another common occurrence throughout the album is some pretty good guitar solos — once again, nothing real flashy or overly fancy, but very well-executed and fitting well with the overall tone; for example, I’d point out that there are a couple good ones in “From the Cradle to the Grave.” And while I’m on the subject about how great the guitar and bass sound, I think you’ll be shocked to learn (as I was) that only the drum parts were recorded in a professional studio; everything else (according to what I’ve read) was done at the home of bassist/vocalist/lead guitarist/principal songwriter/lyricist Matias Nastolin!

Anyway, in case you couldn’t tell, this album is a great example of classic death metal, with perfect subject matter for the genre, and the songwriting and overall tonal qualities come together to deliver just the right feeling of enduring pain and suffering! Now, go buy the CD from Hellthrasher Productions.