We all love a good cover, right? Of course, nobody can quite agree on the definition of a “good” cover — but most often, these are usually the ones that honor the spirit of the original while taking them in a new direction, or those that are totally unexpected choices for the band doing the covering. Anyway, I’ve got two brand new ones for you in this post, and you can be the judge!

First, Swedish atmospheric/depressive blackened death metal band Shining has released the first song from its upcoming covers EP Lots of Girls Gonna Get Hurt. Scheduled to come out 16 May 2012 from Spinefarm Records, this will feature versions of songs by Katatonia, Kent, Imperiet, and Poets of the Fall. Apparently, the renditions here are different enough from the typical Shining material, that frontman Niklas Kvarforth issued a statement (the quote here is taken from a paraphrasing of that statement, which was published in a press release by the band’s management), saying that this EP

…is definitely not a change of direction for the band. It was recorded at the same time as the band’s as yet untitled eighth album, and represents some of the artists and music that Shining’s members like and listen to. The fact that some Shining followers will be ill at ease with the material is, according to the band, irrelevant.

Anyway, today the band has issued the first song for you to check out, which is Katatonia’s “For My Demons”

Sounds pretty good, but totally different from the Shining sound that I’m used to! So I can understand the need for the explanation. (For those who might be new to the band, as an example compare this song from their 2011 album VII: Född Förlorare.) 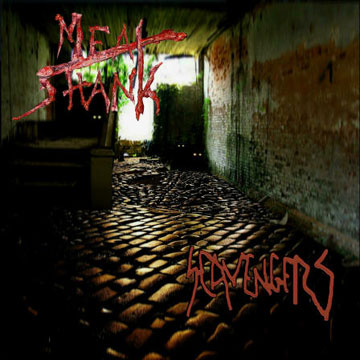 For the next order of business, it turns out Overkill drummer Ron Lipnicki recently hopped onstage to perform with Kansas City thrashers Meatshank, and I’ve got video footage to share!

Now, I definitely love me some Overkill, so my ears sure perked up when I heard this news. It seems the legendary New Yorkers had just played a show at the Beaumont Club along with God Forbid, Diamond Plate, Suidakra, and local openers Marasmus on 26 April. And then there was an after-party being held at the Riot Room, where Meatshank were jamming with members of fellow KC bands Vanlade and Hellevate.

As it turns out, the group just started playing “Seek and Destroy” when Lipnicki was heard to shout, “Oh, I know that song!” and ran over to drummer Shane Cook, whom he promptly evicted from his throne. By all accounts, it was an unforgettable moment for everyone involved. In any case, it looks like it was a lot of fun, judging by this video:

Meatshank are currently working on their next full-length record (not yet titled, expected to be released around the middle of this year), to follow-up 2010’s self-released Scavengers — which is currently streaming in its entirety here.

2 responses to “Cover Me: Shining Does Katatonia, Meatshank Does Metallica (With a Little Help from Overkill Drummer and Friends)”