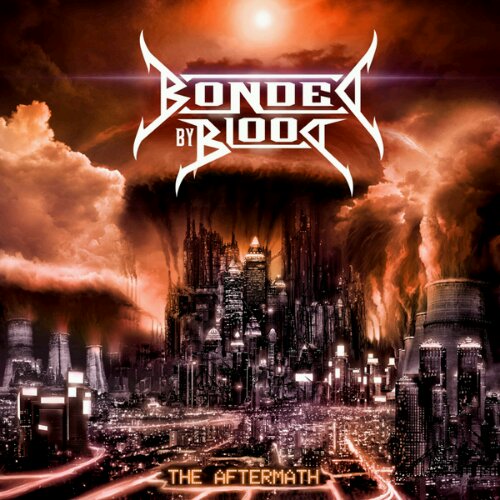 Bonded By Blood, who are associated with the contemporary “re-thrash” revivalist movement (and not, as the name implies, an Exodus tribute band), are putting out a new album, The Aftermath, on the 3rd of July (2nd July in Europe) through Earache Records.  In anticipation of that forthcoming release — their third full-length and fourth overall — they’re offering up a brand new track from that album for you to download for FREE!

Also I’ve got some pre-order info as well as tour dates to share with you, so keep on scrolling…

The Aftermath will be available for purchase from fine retailers everywhere, BUT there’s an exclusive offer only available to customers who buy through the Earache Webstore: a bonus CD featuring a cover of Nuclear Assault‘s “Critical Mass,” PLUS free shipping!  They’re also offering different combo packs including t-shirts and whatnot.  For North America, pre-order here, Europe go here.

Bonded By Blood have also just launched a North American tour with Kittie, Blackguard, and The Agonist.

They aren’t coming to Pittsburgh — the closest stop is about three hours away in Cleveland, which isn’t such a bad drive, but personally I’m not really sold on the rest of that line-up.

If that sounds appealing to you, though (I promise not to judge you), or if you live closer to one of these cities, here are the dates:

So once again, if you weren’t paying attention, the new song “Restless Mind” can be downloaded for free here!