Hey, what’s up, loyal readers? It’s been a long time since I’ve done one of these “Signmeto Roadrunner Records” Band Profiles. For a few months I was doing them on a weekly basis, but some scheduling issues arose and — as you may have noticed — I ended up missing a few weeks.

So what the hell leads me back to the Signmeto website today — on a Sunday, no less, when I normally don’t even do any writing or post anything at all? Well I just learned that local (Pittsburgh-area) band Wearing the Inside Out, who have a few of their songs on that site, are in the midst of a campaign to raise funds for their upcoming east coast tour. I only just found out about this today, but apparently this is the last day (the deadline is midnight tonight, about SIX HOURS from now!), so I wanted to share it as soon as I could.

As I always do in these Signmeto Band Profiles, I’ll check out the songs you can hear on the website and tell you a bit about them. I’ll also tell you about the great gifts (CDs, t-shirts, etc.) you can get for helping the band out with donations…

I’ve actually heard this band’s songs before — I saw them on a chart or a list of recently-rated bands or something on the SMT website, and the name caught my eye because it’s also the title of my favorite song from Pink Floyd‘s The Division Bell album. When I noticed they were also from Pittsburgh, I became really curious and decided to give them a listen. As it turns out, they don’t seem to have anything to do with the Pink Floyd song (I don’t actually know the source of the name), but they still play pretty decent rock music that’s worth checking out.

The three songs from the band’s Signmeto page are “Come With Me,” “Hollow,” and “Control It” — and since none of these are listed as tracks on their debut EP It’s Okay, We’re on Tour, I will assume they have been taken from their second EP, Part One EP, since I haven’t been able to locate a tracklist for that one.

The band specialize in a modern hard rock sound, often compared to acts such as 30 Seconds to Mars. Everything here sounds rather well-written, well-performed, and well-recorded — despite the fact that the band members average a mere eighteen years old (or perhaps slightly higher by now, as I don’t know the exact age of the bio I swiped this information from).

In addition to the songs found on the Signmeto page, the song “You” from their previous EP has been made into a video — which features the band near one of the better-known Pennsylvanian landmarks: a road construction zone.

If you like what you’re hearing, you can support the band’s upcoming tour (set to kick off in August, and include stops in Columbus, Louisville, Nashville, Atlanta, Myrtle Beach, Virginia Beach, Baltimore, Philadelphia, and Allentown), so that they are able to buy necessities like gas and food along the way! The fundraising campaign is being done through Indiegogo, here, and the following graphic will show you all the gifts you can receive to thank you for your help, at various levels ranging from a CD all the way up to corporate sponsorship of their tour van… 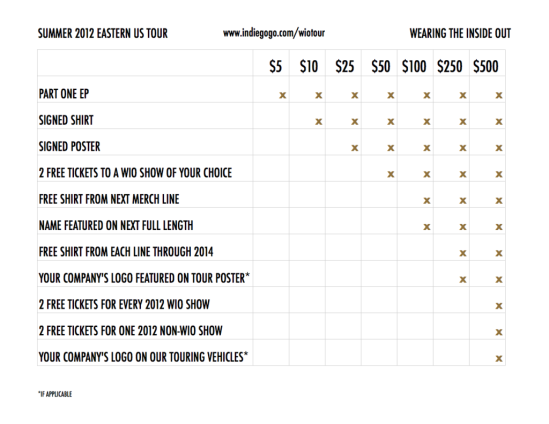 Once more for those who may have missed it, here is where you can go to help the band.

2 responses to “Time for Another “Signmeto” Unsigned Band Profile: Wearing the Inside Out”