Isn’t it so weird how time works? Or, our perception of time, anyway…

I mean, it feels like this week has been dragging on forever — like it seemed that the weekend would never get here (and now it’s just a few hours away!) But then, looking at the bigger picture, it feels like this year has been flying by. Like, it doesn’t seem like it should be September already, and here we are approaching the END of September!

And as of tomorrow, it’ll officially turn from summer to fall — which is fine with me, because I’m so sick of hot weather anyway, but my point is, time just seems to keep slipping away so fast… unless you’re stuck at work, that is.

Anyway, since summer’s basically over now, the schedule of local shows seems to have gotten a little bit lighter — but there’s still plenty of chances to get out there and rock out! (Or, to thieve the slogan from local printers Commonwealth Press on their new NHL-related tees, “Rock aht with your lock aht”!) 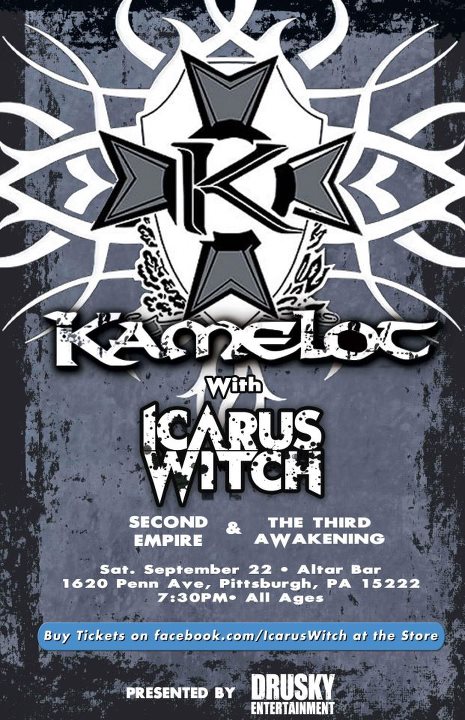 Formed over twenty years ago in Florida, and named after the mythical city in a famous Lerner & Loewe musical (no, not My Fair Lady!), melodic metal powerhouse Kamelot are preparing to release their TENTH full-length record Silverthorn in October, via Steamhammer Records.

In celebration of that milestone, they’re currently in the middle of a tour all over North America (see the thumbnail image below for a full list of dates — click on the picture for a larger version).

Anyway, on Saturday (tomorrow night), the band will be dropping by Pittsburgh’s Altar Bar, joined by Pittsburgh’s own melodic/traditional metal juggernaut Icarus Witch. (If you haven’t seen it yet, check out this review of their album Rise which was just released this July!)

More details on this event here, order your tickets here, then RSVP here! 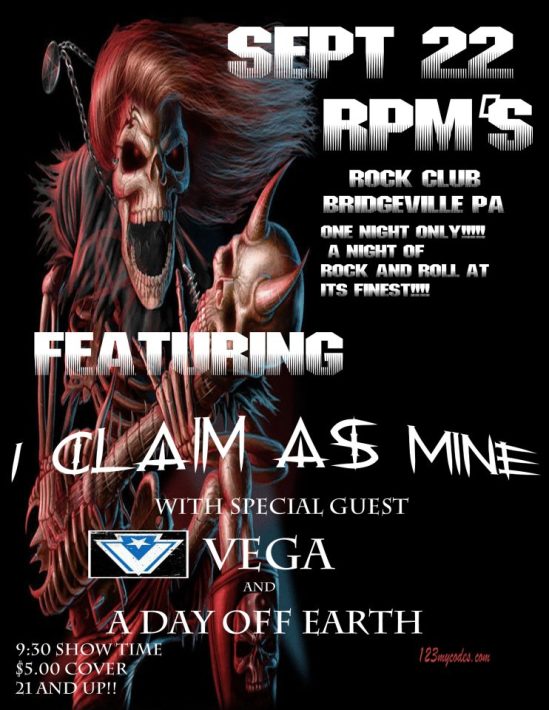 I Claim As Mine, VⒺⒼA, A Day Off Earth

And over on the other side of town Saturday night, your ears can be assaulted with an amalgamation of classic rock, hard rock, classic metal, hard metal, rock metal, alternative rock, alternative metal, metal metal, alternative classic, jock rock, shock rock, cock rock, and disco. (Okay, maybe not that last one.)

Locals I Claim As Mine and VEGA will be joined by A Day Off Earth visiting from Maryland. I’ve never been to RPM’s — actually, I haven’t been in that area at all for quite a few years — but I’m glad to see stuff happening out that way since the Rhythm House had shut its doors. Looking at a map of its location, it seems to be more or less across the street from where Chuck E. Cheese is (if that’s still open), so if you happen to be in the neighborhood, maybe drop by and play a little skee-ball on your way to the show? 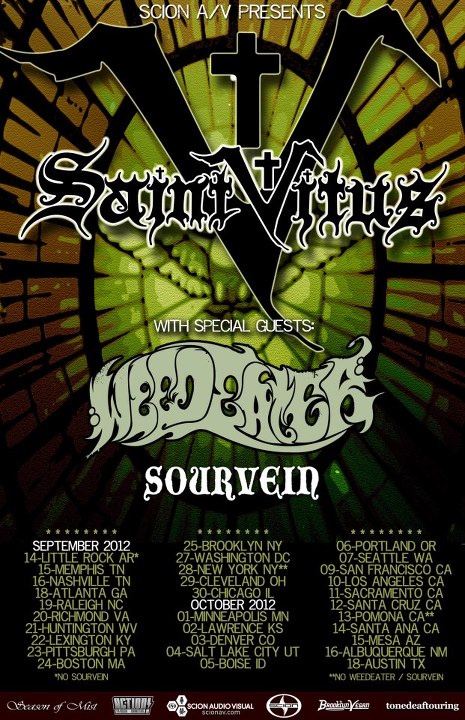 at the Rex Theater

Yes, that Saint Vitus — one of the biggest and best-known of the three dozen or so bands fronted by Scott “Wino” Weinrich, which the legendary doom metal singer/guitarist recently re-joined after a lengthy absence. Their album Lillie: F-65, released this past spring, was their first with Wino in over a decade. And now they’re hitting the Rex on Sunday night.

Joining them will be a few major players in the stoner/doom milieu, namely Weedeater, Sourvein, and Pittsburgh’s own Molasses Barge. Let’s just say, hypothetically, if you have a job interview or something coming up and you anticipate there might be a drug test involved — you might be better off not even walking near that part of Carson Street around the time of this show…

Advance tickets ($16) will be available directly from Molasses Barge, and also at these fine locations (plus a $1 service charge in most cases): Sound Cat, Caliban Books, Dave’s Music Mine, Slacker, and The Exchange (Squirrel Hill & Downtown).

RSVP to the show here.

(Oh, and speaking of walking near that part of Carson Street — I’ve heard a rumor that all the cool kids will be partaking in pre-show festivities at The Smiling Moose, just three blocks away, all afternoon long. I’ll assume somebody will have a TV nearby so you don’t miss any of the Steelers/Raiders game. Then sometime around eight, everyone can line up and hold hands like a first grade field trip, stumbling their way down to the show. You can RSVP for that here.)