Wow, sometimes it feels like all I ever do anymore is write these “What To Do In Pittsburgh” posts. It might look that way, but don’t worry — there’s some cool stuff brewing behind the scenes around here, some big changes and announcements will be coming shortly. In the meantime…

Usually I end up covering a weekend’s worth of events with these things, but it seems like this week there’s an extraordinary amount of stuff going on in between the weekends. So that’s why I’m throwing together this special two-part weekday edition — there’s some stuff to keep you busy each evening from Monday through Thursday this week! This post will cover tonight and tomorrow night (Monday the 24th and Tuesday the 25th) and stay tuned for the rest to be posted tomorrow…

Tonight in Larryville — an evening of nasty crusty blackened punk with Infernal Stronghold visiting from the other end of Pennsylvania (full details on their fall tour can be found here), joined by local blackgrinders Wrought Iron and crossover hardcore filth-merchants Drug Lust (who don’t have a Facebook page as far as I could tell, but you can give ’em a listen at Bandcamp here).

RSVP to this show here. 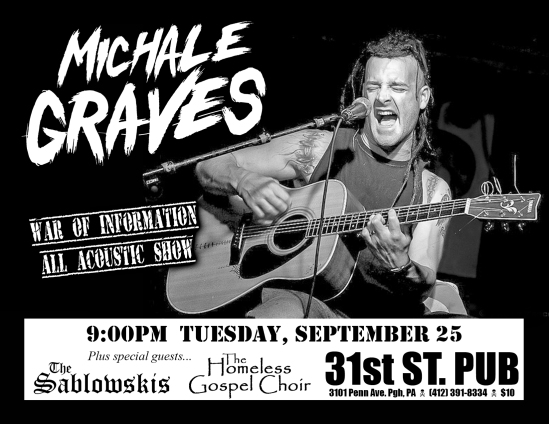 After wrapping up the full-band segment of his nationwide War of Information tour, Screaming Crow recording artist Michale Graves is coming back to the Burgh for a more intimate acoustic set, which will include a blend of solo material and some songs from his tenure as the Misfits‘ frontman. See more information on this leg of his tour here.

The show will also feature a performance by hometown rockers The Sablowskis — although unfortunately, I’ve learned that The Homeless Gospel Choir has had to cancel due to one of its members dealing with a family tragedy.

RSVP to this event here or here.

Official Bio: The Devil Makes Three is kind of a strange band: a drummerless acoustic trio consisting of two guitarists and a string bassist, the group is deeply rooted in the blues and country music, while enthusiastically incorporating elements of bluegrass, ragtime, and jug band traditions as well. But the group also makes no bones about its punk rock influences, and despite the lack of a drummer, it always plays with the needs of dancers in mind: “We play mainly rock venues where it’s not seated,” says bandleader Pete Bernhard. “It can get pretty crazy, people dancing and drinking and yelling. And that’s the way we like it.”

Although the Devil Makes Three consists entirely of New Englanders (two members are from Vermont and one is from New Hampshire), the group formed in Santa Cruz, CA and self-released its eponymous debut in 2002. Its sophomore effort, Longjohns, Boots and a Belt, was released in 2004, followed by a live album titled A Little Bit Faster and a Little Bit Worse. The band then signed to Milan Records, which reissued the debut album; in 2009, Milan released the band’s third studio album, Do Wrong Right.