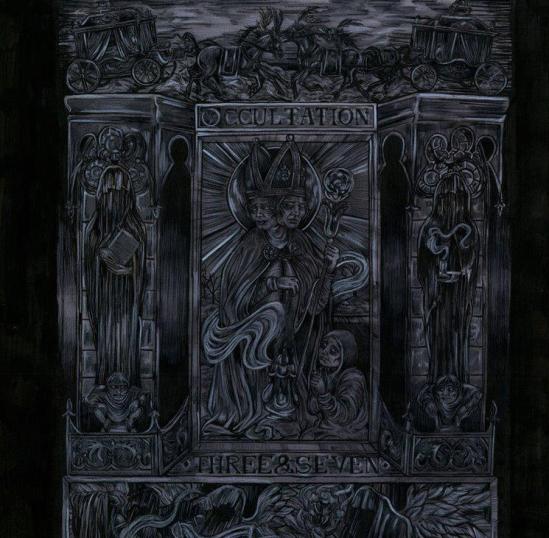 Good morning!! Seriously, last night’s show (Winter’s Wake day one) was every bit as amazing as I could have hoped! Still shaking off some of the effects of being there til past 1 am after working all day yesterday, but I’m so excited about today it doesn’t even matter. I’ve got another few interviews to share with you with the last few bands that’ll be playing today…

As I’ve been saying all along, with so many people to talk to, I tried to keep these short and sweet. Just long enough for you (the reader) to get a bit of a lesson about each band’s history, to learn a little about where they came from and what they’re doing now, so that you can excited about seeing all of them, too!

This one was my discussion with “V”, drummer and vocalist for the band Occultation:

VOS: Hello, and thank you so much for taking time out of your busy schedule to talk to me! How are you?

VOS: Would you mind introducing yourselves for the readers?

V: We are Occultation from New York; we play metal music inspired by a wide range of metal and non-metal influences.

VOS: I’ve seen you described as anywhere from doom metal to occult rock, but I’m curious to know, in your OWN words how would you describe your music? Also, who are some of the people or other bands that have influenced you and shaped your sound?

V: We do not really fit into these categories, as the aim of this band is to combine our different influences in songwriting without intentionally aiming for any genre. We love Italian doom in the vein of Death SS, Black Hole, etc, as well as Mercyful Fate, Black Sabbath, King Crimson, Candlemass, Sisters of Mercy, and the list goes on and on.

VOS: Can you tell me a little bit about the history of Occultation? For example, how and when you guys originally got together?

V: We got together in a very relaxed way. [Bassist/vocalist] MAL and myself were always hanging out at this studio in Brooklyn and she agreed to help me record some riffs. [Guitarist/organist/vocalist] EMM also helped me record and they both decided to officially join after the second song was completed.

VOS: And what are some of the highlights of the band’s career so far?

V: The release of our album in the US and in Europe, the shows we played in Dublin and Montreal are also significant highlights.

VOS: Your album Three & Seven came out last year on Profound Lore, and all that I’ve read about it has seemed very positive: including some comments from writers I have a lot of respect for (such as That’s How Kids Die and Full Metal Attorney) saying that out of a rather crowded field of occult doom rock nowadays, you really seem to stand out as someone who’s doing it right. What is your feeling about the response to that album so far?

V: Honestly, we had absolutely no idea there was a trend for “female” fronted occult rock. We were just making this music selfishly for our own listening pleasure. Just give our album a listen and you will see why we do not fit into this category. The response for the album has been mainly positive, especially from Europe; we are happy if some people like it as much as we do.

VOS: What kind of future plans do you have for the band — any new material on the horizon perhaps, or any big summer tours or festivals planned?

V: We have a West Coast tour coming up in March with Borrowed Time that we are really excited about. We love their music and look forward to playing with them again. Also, we are currently working on new material for our second album.

VOS: And the last thing — I’ve been asking everyone this — is there anyone else playing at Winters Wake that YOU guys are especially look forward to seeing?

V: We look forward to all the bands and especially Dream Death!

View the full line-up of the festival here, RSVP to the Facebook event here!