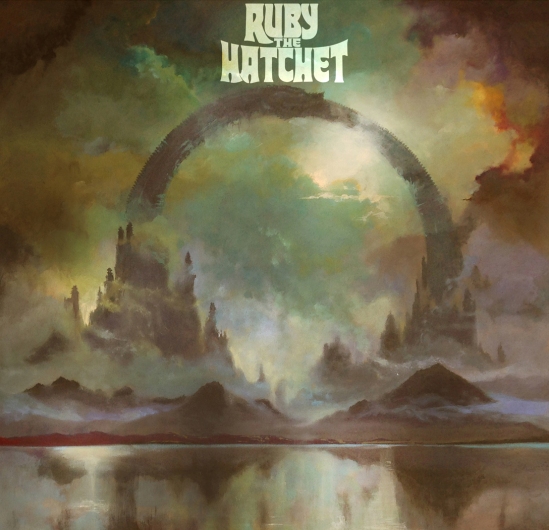 Good afternoon. Today I’d like to talk to you about two different bands who each fall under the general umbrella of “psychedelic/stoner rock.” Both have new releases out (recently, or within the next two days), and both will be hitting the road (separately) playing various shows and festivals across the USA over the next few months. First I’ll introduce you to those recent releases, and then head down a little further to the comments section where I’ll share the scheduled tour dates!

Ruby the Hatchet have been kicking around somewhere between New Jersey and Philadelphia for about the past five years, but I have to admit I completely missed out on the band — until a couple of months ago when I caught a review of last year’s Tee Pee Records release Valley of the Snake, posted on the Supercorrupter website. Right after that, the name caught my attention again when I saw a news release about RtH re-releasing their debut album from 2012. Originally only available digitally, Ouroboros — which the band cites as a major stepping stone into the psychedelic blues-rock sound they’re now known for, and which featured founding members Jillian Taylor (vocals), Johnny Scarps (guitar), Owen Stewart (drums) and Mike Parise (bass), as well as introducing organist Sean Hur who would later join as a full-time part of the band — is now out on vinyl via RUR Records.

The nine tracks on this re-released record are filled with plenty of feedback, fuzzy basslines, stoner riffs, and strong bluesy vocals. Some songs lean in a more stoner direction, musically speaking (such as “The Lean” — which includes an especially nice psychedelic organ part — and “Wicked Ones”), while others tend to be a bit more bluesy (“Strange Hold,” for instance), but generally the band does a good job straddling the styles.

As the song “Can’t Get Him Away” begins, the vocals seem a bit more sultry than before, but on certain lines or phrases Taylor really belts it out. When she does, I was tempted to point out how much it resembles Robert Plant, until the quick shuffle part that happens in the middle of the song where another vocalist joins in (drummer Stewart is also credited with vocals on this album), and these parts sound eerily even more like Plant. The incorporation of two (or more) vocal parts is another element RtH had started experimenting with on this album, they have said, and it appears to have been quite successful: the very smooth-sounding “Holy Father” (whose guitar/bass/organ interplay is rather reminiscent of the earlier parts of “Shine on You Crazy Diamond”) includes what appears to be at least three vocal parts harmonizing together, which themselves are very smooth and soulful too; later, “Nowhere” features some real nice harmonies as well, evoking thoughts of a band like Buffalo Springfield.

Mars Red Sky, from Bordeaux, France, have also been out for a number of years — but unlike Ruby the Hatchet whom I discovered via a newer release and then wrote about their debut album today, in this case I’ve been aware of (and thoroughly enjoying) the band’s spaced-out psych-rock ever since hearing their self-titled debut back in 2012, and in this case it’s a brand-new album I’ll be discussing with you: the enigmatically-titled Apex III (Praise for the Burning Soul) which comes out this Friday courtesy of French label Listenable.

From the drawn-out instrumental intro “Alien Grounds” through the massive closing anthem “Shot in Providence,” this album spans the realms of experimental, avant-garde, and post-rock, but also includes plenty of heavy stoner/sludge riffs interspersed with nice and light spacey sounds and trippy vocals that are often extremely catchy and melodic. Distortion and overdriven fuzz kick in occasionally, but these parts tend to dissipate back into mellower stuff and psychedelics. The title track exemplifies this range very well: after starting out heavily distorted, a blend of semi-melodic-but-also-almost-deadpanned unison vocals (talking about who the hell knows what — ostensibly something space-related, though) trade off with guitar licks, but then the song shifts back to a mellower vibe for a little bit, before being swallowed whole by even more overdrive and fuzz.

From there on, the album touches upon plenty of Pet Sounds-type melodies and harmonies, lovely and catchy and haunting. Those melodies — in songs like “Prodigal Shuffle” (which actually turns in somewhat of a southern-blues-jam-rock direction — of course with loads of psychedelic flavor injected as well — partway through) and the wah-laden heavy psych of “Shot in Providence” are pretty much guaranteed to creep into your subconscious mind and linger there eternally. Inserting other influences within the context of the trippy-post-space-rock milieu, “Under the Hood” actually more resembles Ghost and their use of gorgeous, nearly-saccharine-but-also-quite-dark melodies; later in this same song the band also features some harmonies similar to the style of the Meat Puppets, especially in the lines about “your emerald eyes.”

You can grab a copy of Ouroboros here, but if you’re into rare and collectible vinyl, you’ll definitely want to check out the cool orange-and-red limited edition that’s available only direct from the label here. Apex III is available in all formats right here.