I remember one year in elementary school — it might have been fourth or fifth grade — when our teacher would occasionally come in and draw a ketchup bottle on the chalkboard. This was an indication that it would be a “ketchup day” or “catch-up day”: where we wouldn’t have any new lessons that day, but could use the time to get current on homework assignments or whatever else we needed to do.

Looking back as an adult, that sounds an awful lot like a scene from the movie Bad Teacher when Cameron Diaz’ character would show her class videos all day because came to school hungover. But in any case, today’s going to be a ketchup day for some recent news items that have come across the VOS editor’s desk …

Misery Signals documentary Yesterday was Everything will be released later this week!

Captured during their 2014 tour celebrating the 10th anniversary of their critically acclaimed album Of Malice and the Magnum Heart, the film presents the band reuniting with their former vocalist Jesse Zaraska for the first time since his ousting a decade prior, explores the fatal tragedy that brought the band together and follows their journey from Vancouver to Toronto as they face old ghosts and attempt to reconcile the past.

The documentary will be available on June 30th at iTunes, Google Play and Amazon.

[Read our reviews of the band’s first four releases, here and here!]

Diaspora is the impending new full-length from progressive black/death practitioners Cormorant. Slated to drop this August, the consuming, four-track follow-up to 2014’s critically-lauded Earth Diver sees Cormorant take their inimitable brand of progressive metal in expansive and exploratory new directions. Recorded and mixed by Greg Wilkinson at Earhammer Studios in Oakland, California, the sixty-one-minute offering features the band’s longest, most detail-oriented compositions to date — the collective result of two years of collaborative writing.

Musically, Cormorant‘s Diaspora features familiar elements of black, death, prog, and folk metal, but pronounced psychedelic and funeral doom influences can be heard throughout as well, particularly on the twenty-six-minute closing epic, “Migration.” Diaspora also features dynamic performances from renowned cellist Jackie Perez Gratz. Mastered by Brad Boatright at Audiosiege, the album is a crushing statement from one of the Bay Area’s most consistent extreme metal bands.

Additionally, Utah-based visionary artist Jeff Christensen created the album’s vivid and stunning four-panel artwork. Issues Christensen, “The idea was to create four panels of artwork based on a migration theme. I thought it would be interesting to have the panels run consecutively to form an expansive, evolving image where the eyes can just roam. We wanted each painting to be able to hold its own as a standalone image but also be a link to the wider image of the migratory theme. The original artwork was done with oil paints on four 16″ x 16″ panels. The entire process was a challenge, and the finished images are really different than anything I’ve done before. I was given a lot of reign to just do my thing and I’m very happy with the way it turned out.”

To view the full, four-panel piece go to this location.

Diaspora will be released independently on 2xLP, CD, and digital formats on August 11th with US and European distribution through War Crime Recordings. Preorders are currently available here. 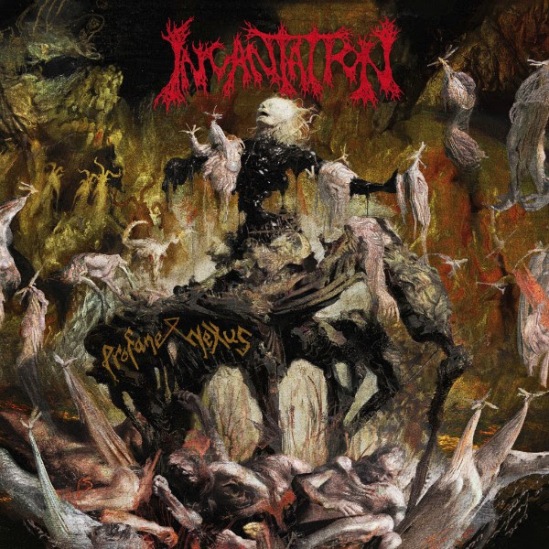 Death metal pioneers Incantation triumphantly return to their original label Relapse Records to vomit forth another unholy offering of godless abominations on Profane Nexus, their formidable tenth full-length album. Embodying a dizzying array of blasphemous tracks – culminating in sacrilegious conquests, crushing dirges, and vile riffing – Profane Nexus is an obliteratingly heavy execution of disgusting death metal that further solidifies the band as one of extreme music’s most influential and consistently hailed artists of the past thirty years.

Recorded at the band’s own Incantation Studios in Johnstown, PA and mixed/mastered by Dan Swanö, Profane Nexus is perhaps the finest example of pummeling death metal and disemboweling funeral doom ever conceived.

The album will be released on 11 August, and can now be pre-ordered in MP3, CD, and vinyl formats right here.

Ruby the Hatchet to drop their third record in late August

Read about the band’s debut, which was reissued last year, at this location.

The new album will hit the streets on 25 August — pre-order your copy here.