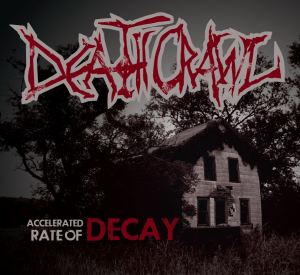 Okay, true story: earlier this month, I had a cookout for a handful of friends (mostly musicians or music-related folks, just because that’s how I roll). At some point in the evening, as we were standing around the fire and socializing, I remember talking to someone about a song that was playing (I’d hooked up my MP3 player and set it to shuffle); during that conversation, the song ended and the next one began — and on hearing the grimey riffs that were pouring out of the speakers, I then remarked, “Oh, and this is Deathcrawl.”

Well. Standing nearby just happened to be Josh Thieler, vocalist for Slaves BC. You may recall that his band creates some awesome music, and so it’s no surprise that he’d generally have pretty good taste in stuff to listen to. Anyway, I could see that his eyes were all lit up. “I was just about to ask you what this is,” he told me, “because it’s really good. This is Deathcrawl?” I nodded, and he added (I’m paraphrasing here; this was a couple weeks ago), “So, my band is playing with this band at the end of the month??” I nodded again, and his face lit up even more.

Because yes, I’m pleased to say, the Ohioan sludge factory that is Deathcrawl is finally playing a show in Pittsburgh, and that show is tomorrow night!! In addition to Slaves BC, that line-up will also feature Meth Quarry and (coming back to the city for the first time since last summer) The Osedax from Virginia. More details on that show coming up soon, but first, I’d like to bring you up to speed on a band and an album that you really need to be listening to (if you haven’t already)! 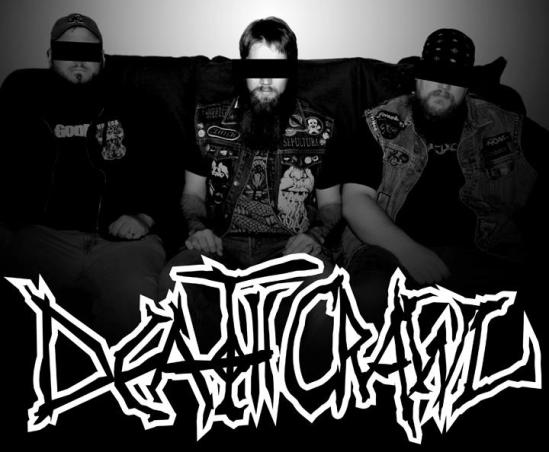 If ever there was a band whose name sounded exactly like their music, that would have to be Deathcrawl. I’d first become aware of these guys back in October, when I learned that they’d be playing a show in Lakewood, Ohio, with one of my personal favorite bands, Vulture. They describe themselves as “apocalyptic sludge” and “a pummeling soundscape of failure, apathy, and violence.” Based on that description — and some very complimentary feedback from the Vulture crew — I knew this was something I needed to check out.

Right around that same time, the band came out with its second full-length release, Accelerated Rate of Decay. So I got myself a copy of that, immediately fell in love with it, and have really been digging it ever since. The entire time since then, I’ve also had plans to write about it and share the goodness with all you wonderful people who are reading this — and I am truly, sincerely sorry that I haven’t gotten around to it sooner. Because that’s like seven months you’ve spent not listening to this album, and I feel like it’s entirely my fault. Hopefully this will make up for it, though. At least a little bit.

The first sounds you hear (the introduction to opening track “Burned Out”) really set the mood for the remainder of the album: feedback and noise and something that resembles air-raid sirens. A harsh, apocalyptic vibe that brings to mind darkness and destruction and death.

Musically, sludgey guitar riffs and (often) slowed-to-a-crawl drum beats accentuate the bleak and hopeless atmosphere. Great, cool riffs are found all over the place here, from where “Burned Out” kicks in, all the way through about the last minute or so of “Lucifer’s Hammer”, where everything dies away to return to a noisescape similar to the opening of the album. In between, one of the things the band does especially well is dropping the tempo suddenly: this happens around the middle of “Burned Out” and just after the introduction of “Blight”, and it isn’t exactly like someone suddenly put the brakes on — but more like downshifting from fifth gear to maybe second, where the slowdown is far more immediate and is accompanied by a physical jolt to the whole body, and where everything seems to be working that much harder (and consequently, sounds that much heavier). About halfway through “Blight”, the tempo starts grinding down even further, until it has completely gone from a crawl to a dead stop. Particularly slow tempos are employed throughout most of the songs “Dead is Dead” and “Disturbing the Earth”, to great effect.

Finally, scattered throughout the album are some other little embellishments that just add a bit more atmosphere; an additional dimension, if you will, to the grim picture that’s being painted. This is due to the inclusion of various synth sounds in some places — such as the intro to closing track “Lucifer’s Hammer” and near the end of “Disturbing the Earth”. But I’m not talking about some kind of cheesy strings or anything like that — these are raw, unnatural, analog-sounding synth noises that bring additional textures and grit into the mix. Stuff like angular, sawtooth waves; walls of unpleasant noise that swell to the point where they threaten to swallow the song whole (and the listener as well); and, in one case, some strange space-age sounds, not entirely unlike the introduction that precedes the song “Jet Airliner”. 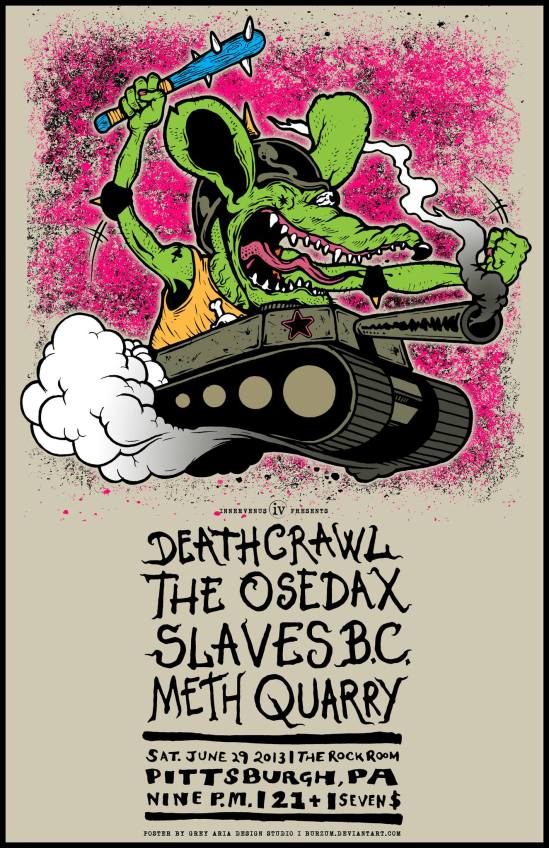 So anyway, here’s the situation.

Deathcrawl will be appearing in Pittsburgh for the first time ever, TOMORROW NIGHT, the 29th of June, at the Rock Room. Now that you’ve read about their music, I’m sure you’re dying to go see this show — and I assure you, the rest of the line-up is totally solid as well. Bring ear plugs, that’s all I’m saying.

One response to “Deathcrawl – Accelerated Rate of Decay”