Yesterday when we talked about Slomatics‘ first two albums, I mentioned that the band has signed with Black Bow Records, who has rereleased those two albums in advance of the band’s new record due later this year. But this partnership was not the first time they’ve dealt with that label OR its owner Jon Davis. Slomatics and Davis‘ band Conan — from Merseyside County, England, just across the Irish Sea from Belfast — had put together a split record back in 2011. After that limited-edition vinyl quickly sold out, Black Bow put out another pressing of the split in 2014, which also wasn’t around for very long.

And now, they’ve announced that there will be a new batch coming soon — only 200 copies will be made available this time, and each record will be pressed onto a full-color representation of that incredible cover art! An exact release date hasn’t been set yet, but pre-orders are on sale now, and they’re expected to begin shipping around early September. 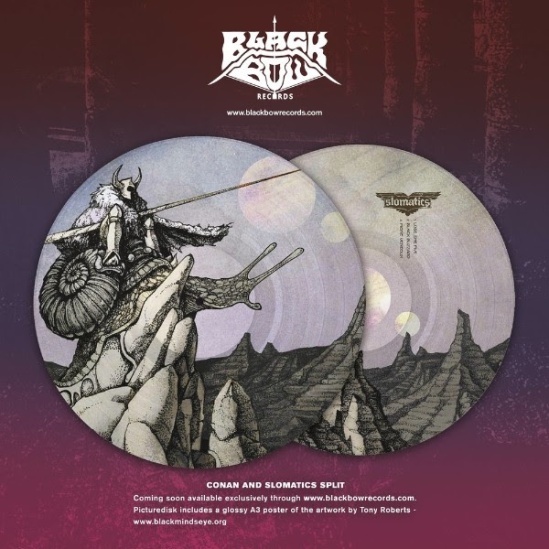 Each band has contributed three tracks to this split, averaging around six minutes apiece — but although Slomatics‘ three songs are all pretty close to that figure, the Conan side is divided up a bit more unevenly. The middle track, “Obsidian Sword,” is a minute-long interlude consisting of this weird electro-distorted voice talking. Outside of that, the other tracks (“Retaliator” and “Older than Earth”) are exercises in deep and sludgy, YOB-like, epically slow doom; bass-heavy, and with jarring amounts of fuzz and distortion. The last of these — by far the longest of the three — also incorporates a wavery, old-filmstrip-soundtrack-style synth that takes over the lead in a couple spots. Vocally, it’s all about harmonized hollering and yelling, in two parts much of the time, but then for extra dramatic emphasis, occasionally switching to a three-part harmony, where the third part is more of a deep roar.

On the B-side, those who read yesterday’s article (or those who were already familiar with Slomatics) will not be surprised to learn that we find three songs (“Lose the Five,” “Black Blizzard,” and “Mont Ventoux”) that are generally fuzzy and slow. In the years that had passed since the band’s first two albums, it appears that the songwriting has drifted towards somewhat denser, thicker arrangements (plus the appearance of a bit of cowbell in the first song!); all three of these feature vocals more often than was typical in the older material, as well as including more layers of vocals during the times they are present. It still sounds like there’s only one vocalist here (and from what I’ve read, it appears this split was the last appearance on record for the band’s original drummer/vocalist), but there just seems to be more parts inserted into the thick and sludgy (but never muddy) mix. These vocals, too, are utterly dripping with endless delay/echo/reverb, kind of the “Ghost of Tom Joad” effect applied in a sludge metal context. Oh and by the way, if that super-heavy third song seems familiar to anyone out there, it might be because it was included on a ThrashHead Magazine compilation that was featured on this website several years ago.

This new edition of the split, on full-color 12″ vinyl picture discs and also including a poster of the album artwork, is available to pre-order right here. You can listen to each half first, by using the Bandcamp players below, but hurry up before this limited edition disappears forever!