Almost two years ago, the 2011 split record between these two bands, each of whom has been discussed multiple times on this website (Conan | Slomatics), got the re-release treatment on a really cool picture disc by Black Bow Records. We discussed that right here.

But in case you missed it (or if you DID manage to snag one of those copies, but you wish you had a second one to listen to!), Black Bow is doing it again! This time on 180g heavyweight vinyl (for the first time ever) in a peculiar shade of “ogre green” (also for the first time ever). Keep reading to revisit our review of these songs from the 2016 release, and then find where you can buy a copy of the new edition.

END_OF_DOCUMENT_TOKEN_TO_BE_REPLACED 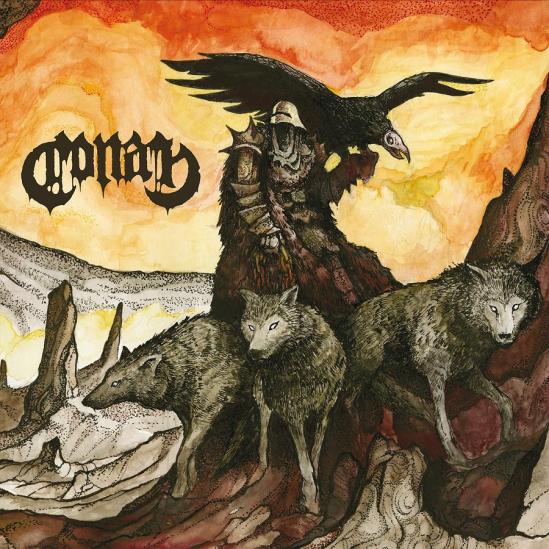 Following our last article that covered a few of North‘s more recent releases, it only makes sense to talk about their current tour-mates Conan as well. The Merseysider trio has been around for over ten years — although the line-up has changed a few times: from 2011 (when their split record with Slomatics came out, which was the last release we discussed here) until the 2014 emergence of their second full-length Blood Eagle, Paul O’Neill had remained behind the drums, but Phil Coumbe had taken on bass/vocal duties; then by 2016 new drummer Rich Lewis had joined, and Chris Fielding (a prolific producer and engineer who had worked on all of Conan‘s previous releases) was added as bassist/vocalist. The only constant throughout the band’s career has been guitarist/vocalist Jon Davis, who also runs Black Bow Records in his spare time — oh and by the way, you may remember from when last year when we covered Boss Keloid‘s Herb Your Enthusiasm, which was a Black Bow release, Davis and Fielding both had guest spots on that record.

Well, it wouldn’t be accurate to say that Mr. Davis being part of the band continuously has been the only constant over the past decade-plus. The sound produced by this trio has perpetually been as savage and barbaric as the literary character from which their name was derived. To be specific, they identify themselves as “caveman battle doom” — and you’ll find, as we make our way through Blood Eagle and last year’s follow-up Revengeance, there really couldn’t be a more apt description …

END_OF_DOCUMENT_TOKEN_TO_BE_REPLACED

Yesterday when we talked about Slomatics‘ first two albums, I mentioned that the band has signed with Black Bow Records, who has rereleased those two albums in advance of the band’s new record due later this year. But this partnership was not the first time they’ve dealt with that label OR its owner Jon Davis. Slomatics and Davis‘ band Conan — from Merseyside County, England, just across the Irish Sea from Belfast — had put together a split record back in 2011. After that limited-edition vinyl quickly sold out, Black Bow put out another pressing of the split in 2014, which also wasn’t around for very long.

And now, they’ve announced that there will be a new batch coming soon — only 200 copies will be made available this time, and each record will be pressed onto a full-color representation of that incredible cover art! An exact release date hasn’t been set yet, but pre-orders are on sale now, and they’re expected to begin shipping around early September.