Hello out there, folks. Hope this week has gone well for you all. Over the past few days — during which things got pretty crazy busy, to the point where I didn’t have any time to get anything written — I’ve heard some pretty incredible brand-new releases, and I definitely look forward to sharing those with you. But not quite yet; instead, today we’re going to turn back the calendar a little bit, and spend some time with a couple of my favorite releases from years past that I just never quite got around to writing about yet. These were featured in my Top 13 of 2013 and Top 14 of 2014 lists, respectively, chiefly due to the fact that both of these bands know how to write a hell of a song. These are both albums that I’ve listened to front-to-back like dozens of times, and I feel pretty certain you’ll agree that every single song on each is of excellent quality …

The Ravenna Arsenal are from Randolph, in northeastern Ohio, which is just down the road from Kent (where they will soon be appearing at this year’s Blackout Cookout) and, of course, Ravenna (the site of the National Guard base and former ammunition plant from which their name derives.

I’ve seen these guys play a handful of times here in Pittsburgh (and once in Kent), and they are always on point, as they blaze their way through songs that are often lengthy and complex — even though, well, let’s say they usually don’t seem too shy when it comes to consuming beer. There was one time in particular, they were doing a house show in Lycosa‘s basement practice space. Virtually everyone in the room seemed to struggle just to stand up straight, and I remember being impressed when they launched into the song that opens both the vinyl and digital versions of I., “Ultraheavy.” It’s got this deceptively mellow alternative-rock-style intro, almost Radiohead-sounding (this vibe comes back a little bit in the chorus too, with sort of a “My Iron Lung” — or maybe “Dear Prudence” — type of arpeggio blended in there). But then this heavier riff kicks in, which occasionally sneaks in a bar of 15/16 (or maybe 7/8, depending on how you’re counting), which could potentially throw a lot of people off even if they were dead sober.

After that, the track listing sort of diverges, depending which edition you’re listening to. “The Desert Shows No Mercy,” at ten and a half minutes, is the longest song to be found here, and also happens to be my favorite by this band. It opens with a finger-picked-style guitar, kind of like a post-country-rock atmosphere for the first minute or so. But then out of nowhere this FUCKING HEAVY AS SHIT riff comes in, slow and sludgey/doomy — if you could even call it a “riff” since technically it’s just a series of eighth notes on the same pitch, then a couple sustained notes down a step. But call it what you will, this repeats for a little while, paired with some deep-growled vocals, but then it drops away, replaced by interwoven guitars that are kind of noodly and jammy (think Blind Melon covering “Fairies Wear Boots”) for a long-ass time until that country-rock vibe from the intro comes back midway through the song. Then suddenly that HEAVY-ASS RIFF THING again, this time with an aggressive guitar solo, followed by the return of the vocals, which are now more like a banshee-howl. Finally, the song ends with a few more repeats of that slow sludge-doom riff, with long sustained feedback in between each iteration.

The LP features three more songs: “The Wild Dogs of Giza” and “Fire Moth” which both feature heavy stoner metal riffs and clean singing, plus “The Water that Covers the Sky,” a somewhat Pink Floyd-y psychedelic blues jam. But the downloadable version includes four other tracks that had to be left off the vinyl for time constraints: “Ammunation” (whose brief intro almost sounds like the beginning of a Nirvana song and then goes into a bassline that resembles a different one — but with more intelligible singing, of course); “Knights” (where, in the chorus, the vocals seem to veer wholly into the Flaming Lips territory that’s sort of hinted at occasionally throughout other parts of the album, and also has the crackly tube-overdrive guitar sound to match); “The Pregnant Void” (a bit more psychedelic and reverby/echoey); and finally, “The Sun” (which alternates between harmonized syncopated chuggy riffs and some looser jammy guitar stuff, and in which periodic unison gang-shouting of the title happens to be the only lyric that appears throughout the song’s eight-plus minutes). 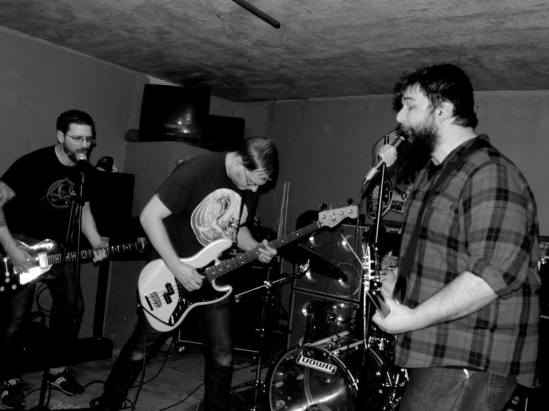 Philadelphia- (or nearby South Jersey)-based Gholas, on the other hand, I’ve only seen once — but that happened to be at a show in Pittsburgh that my own band had opened, and it was also filled with some rather talented local friends’ bands, but still the cross-state visitors put on quite a memorable performance, both in terms of heaviness and also interesting songwriting.

I had given the Dune-inspired band’s latest album Litanies a quick perusal before the show just so I knew what to expect (and I even did a not-even-half-assed attempt at writing something about the band on the day of the show, but after I saw them and bought a copy of the CD (and listened to it over and over) I’ve always meant to go back and give it a more proper review treatment. And finally, two and a half years later, here we are!

With “…And the Lives Come Flooding,” the album kicks off immediately with aggressively growled/shouted vocals, sometimes two or three parts trading back and forth or overlapping, and sets the tone for the rest of the record with a warm and fuzzy, heavy sound, and a tempo that slows down a bit sometimes to get even more crushing heavy, then speeds up a bit elsewhere to take out more aggression.

Variations on this basic formula occur throughout “With Terrible Purpose” with its extra-discordant music (and slight touches of black metal influences with tremolo-picked guitars here and there) and “The Worm” which alternates sections of bendy, de-tuned guitar notes, with powerful full-band unison hits (as well as the two-and-a-half-minute “Calls Out to the Supplicants” which kind of feels like a continuation of the previous track).

And as enjoyable as all of that is, to me the biggest highlights are the final two songs. “The Sleeper,” nearly eleven minutes altogether, takes a long time to get started but when it does … this feels like the heaviest-sounding yet (especially in the vocals, which carry most of the song). We find some more blackened tremolo guitar appearing later, in a few layers; but then the tempo just keeps slowing down and getting heavier and more epic and then gets even SLOOOWER and heavier — this keeps happening approximately each minute for the last 4-5 minutes. And as it turns from incredibly slow to ridiculously slow (reminiscent of the epic conclusion to this grand work of art), it seems like an absolutely perfect way to end the album. But then…

After a pause, the nine-minute “The Fighters” jumps back in with plenty more aggression, tension, and fast-paced dissonance. Speaking of some of my favorite songs, the particular arrangement here sort of recalls the blackened-doom chaos of this lovely little number — at least until everything kind of cuts away to more of a mellow, jazzy beat with a whiny, almost violin-sounding (e-bowed?) guitar lead. There’s still a great deal of underlying tension and unease though, especially after it switches to the aggressive chorus part for a little while and then back to the mellower part again, with an acoustic guitar relentlessly strumming underneath for the last couple minutes as it all fades away into nothingness.

You can grab I. on vinyl (or download a copy for free) right here, and pick up Litanies here.