First, a word about this article’s title: there is an equivalent expression to that idiomatic phrase in Greek — Αυτά μου φαίνονται κινέζικα — as there is in numerous other languages, which would be helpful for non-native English speakers, since in a literal translation the meaning may be lost to those readers. However, the idiom with a similar meaning in several other languages would exclude the double entendre intended by the title in English: that today I am writing about two albums by two ostensibly similar bands, who are both Greek.

Okay, with that out of the way, time to move on to some music. These two albums came out on the same day in January by Code666; each one is the second album from its respective band — Aenaon (based in the regions of Epirus and Thessaly) and Hail Spirit Noir (from Thessaloniki, Central Macedonia) — who are both firmly rooted in a black metal aesthetic, while bringing various other experimental and avant-garde elements into the mix. 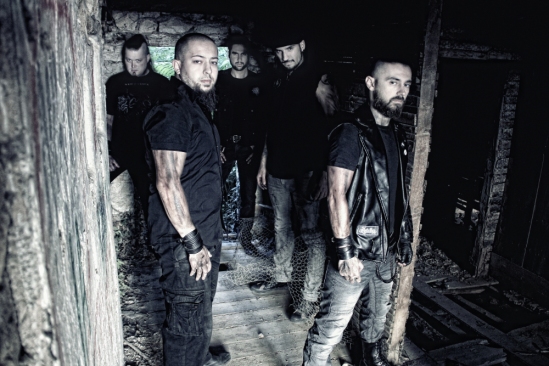 Aenaon‘s Extance (the title is an archaic English word related to “extant”; according to various dictionaries it can mean either a prominence protruding from something, or the outwardly-appearing aspect of existence) is the more authentically “black metal” of the two, although the comparison really says more about how far removed from traditional metal HSN is than being an actual statement about Aenaon. Because this album is rather progressive and a bit avant-garde, with various additional elements incorporated throughout — clean and semi-clean vocals (even a male choir or hints of an operatic style in a few spots), some folk influence (with a wide range of not-traditionally-metal instrumentation), bringing to mind some of the transitional material of a band like Primordial, as they had evolved from raw black metal into more of an epic folk/doom orientation.

Much of the variation to be found here is courtesy of the numerous guest spots all over the album, with instruments such as piano (which is the main focus of intro track “The First Art” and interlude “Algernon’s Decadence,” with other appearances scattered throughout) and saxophone (most prominently in the second half of “Deathtrip Chronicle”; as well as “A Treatise on the Madness of God,” “Der Müde Tod,” and “The First Art”). While being one of the more black metal oriented tracks, “Grau Diva” (for which they’ve released a lyric video — see below) also has interesting layers of clean vocals and various synth sounds; these latter additions were contributed by Haris of Hail Spirit Noir. His signature sound (including mallet-percussion and various types of organ) also sprinkled over many of the songs here, particularly “Land of No Water,” which also features a guest appearance by Japanese avant-black band Sigh‘s vocalist Mirai Kawashima. Other notable guest appearances include some belted-out vocals (that are somewhat reminiscent, perhaps, of 4 Non Blondes‘ Linda Perry) on “Funeral Blues” by Tanya Leontiou of Greek doom metal band Universe217, and some epic-sounding vocals on “Der Müde Tod” (German for “The Weary Death”) contributed by Sindre Nedland of In Vain (and current vocalist for pioneering funeral doom band Funeral).

All of these elements layered together give Extance a very expansive sound; the additional textures and colors from so many different creative forces really define the mood and shape of the album. Of course, with so many guests and additional musicians, moments that are pure Aenaon may be difficult to come by; but don’t worry that the band might need to always lean on others to sound good. “Closer to Scaffold” features some great pummeling rhythms and a memorable shout-along chorus; most of the massive closing track “Palindrome” (the occasional organ part notwithstanding) is also devoid of outside interference and stands as an excellent example of progressive metal (with occasional hints of blackness).

In general, this band has assembled quite an interesting package, with a little help from some friends to fully flesh out their grand vision. Anyone with an affinity for the progressive and experimental side of metal would definitely be advised to give it a listen.

Hail Spirit Noir is a name that ought to be familiar to longtime readers, as I fawned over their debut album on its release two years ago, and then named it among the top few albums of that year. This follow-up, whose title οι Μάγοι literally translates to “The Magi,” continues in a similar vein, incorporating a feeling of blackness with a plethora of old-school rock and psychedelic sounds.

Opening track “Blood Guru,” for instance, has a bassline/drum/marimba part throughout much of the song that lends a decidedly Latin flair — sounding like a really angry version of Santana. The eleven-minute-plus epic “The Mermaid,” which — aside from a couple brief verses (which seem to be very loosely based upon the traditional tune “Sailing, Sailing”, and whose melody is guaranteed to earwig its way into your brain forever) — is mostly instrumental, allowing multi-instrumentalist Haris to show off the wide variety in his arsenal, from organ parts that resemble The Doors at times or Booker T and the MGs elsewhere, to synth lines that harken to classic Styx, and everything in between. With its dreamy harmonic vocals and clean strummed guitar parts that occasionally resolve to major chords, I strongly believe “Satan is Time” could very well have fit onto The Turtles‘ Battle of the Bands album, if only they had chosen to add the persona of a demonic psychedelic hard rock band to the other alter egos they had adopted on that record.

Overall, with its equal combination of a black metal atmosphere and classic rock vibe (and the trademark incorporation of organs, strings, flutes, etc.), none of the songs on this album could be mistaken for anyone other than HSN, again demonstrating their unique and very distinctive sound. Anyone who enjoyed Pneuma will definitely not be disappointed by Oi Magoi; and any metalhead who appreciates unexpected twists on the old standard format (and isn’t afraid to branch out in uncharted directions) would find plenty to enjoy here as well.