Good morning, folks! If you ever feel sluggish and unmotivated during the day, it’s probably because you didn’t start things out right — every morning routine should always start out with plenty of loud music to help the blood start flowing and the brain to start thinking.

Internet radio station Kosher Metal knows this is true, and so they’ve helpfully assembled another collection of some of the great underground music they play.

You might remember I told you about their second compilation earlier this year. That had some great stuff on it, and a few bands (Mouth of the Serpent, Sangre) that I ended up writing more about later.

Well, as of midnight last night, Kosher Komp Vol. 3 has been released and is now free for you to download!

END_OF_DOCUMENT_TOKEN_TO_BE_REPLACED 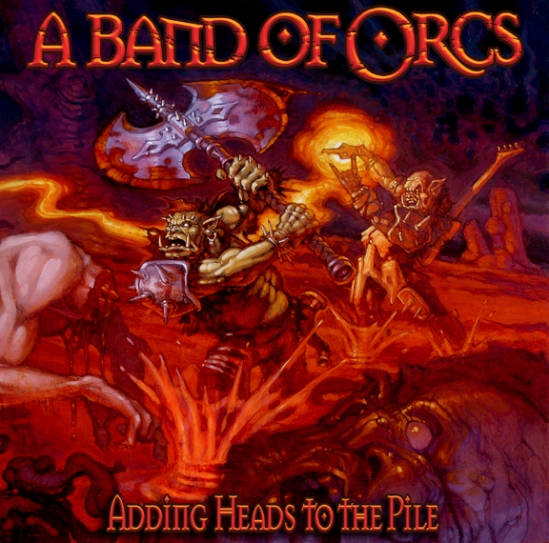 Dear Readers, how are you on this lovely Monday afternoon??

Haha, I’m just kidding. Of course there’s no such thing as a lovely Monday afternoon, unless by some chance you happen to accidentally sleep through the entire day.

But I do have a little bit of good news to share with you … Adding Heads to the Pile, the debut full-length album by A Band of Orcs, will be released in exactly thirty days — on Halloween, fittingly — and starting right now, you can pre-order it to make sure you are one of the first to get your hands on the album! (Also to make extra sure the orcs are going to spare you during their forthcoming world domination — they obviously aren’t going to warn you in advance when it’s coming, so you’d better not take any chances!)

END_OF_DOCUMENT_TOKEN_TO_BE_REPLACED

Well, I feel like I’ve just had my head repeatedly bludgeoned, between an enormous hammer and and an even enormous-er anvil.

And I’m about to go back and do it again.

If that sounds appealing to you, too, then feel free to join me… head on over to Hails and Horns, where they are streaming the first single off A Band of Orcs‘ upcoming album Adding Heads to the Pile, “In the Keeper’s Chamber”!

They’ve also collected quite a bit of information on that page about the story of the band and of their soon-to-be-released concept album, so be sure to check that out while you’re there!

“In the Keeper’s Chamber” is due to be released on Saturday (30 June) as a downloadable single, in advance of the album’s August release (via Itchy Metal). If the rest of the songs are as brutal and punishing as this one, then I’ll definitely be counting down the days until then!

As of right now, the album is expected to come out on CD and digital download, but (as you may recall) the orcs are also taking pre-orders for an incredible 2xLP picture-disc vinyl package (through Kickstarter) — click here for the full details on that, and hurry up if you’re interested, because there’s less than a week remaining for them to achieve their target amount to be able to afford to get the records manufactured! (FYI, a free download of this song is just one of the many glorious rewards that await you for your contributions…)

California’s A Band of Orcs would love to release their forthcoming self-titled album in the huge, full-color glory that is a double-LP picture disc vinyl format. They would also love to come to your house and slay you and your family, then steal all your gold and eat all your food. They don’t seem too particular about which of those things takes place, but I suspect you might have strong feelings about one or the other.

Fortunately, the band has decided to give you the opportunity to help ensure the first outcome can happen — which would also ensure that you are spared during the orcs’ eventual quest for world domination. If that sounds appealing to you, here’s how it works…