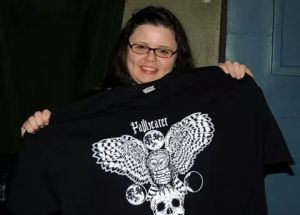 In the VIP balcony at Mr. Small’s Theatre (Pittsburgh), February 2013

EDITOR’S NOTE: for nearly two years, the Arkansas melodic doom quartet Pallbearer has been among my wife’s absolute favorite bands. I know she’d been eagerly snapping up every available bit of information leading up to the release of their second album; now that it’s been released, we listened to it together, and she had some strong reactions and opinions — so I asked whether she wanted to write something about it. So here is her review of Foundations of Burden.

reviewed by Mrs. Valley of Steel

I first heard Pallbearer in December of 2012 on accident. I was scrolling through Facebook and saw a video that someone had posted, which I thought was something else. I clicked on it, I listened and I had no idea what I was in for ultimately. I have to admit, I felt an immediate kinship to this music. For much of my life, I have felt an attachment to a darker side of my personality; I often embrace being melancholy and don’t always see it as the burden that some people do with those types of emotions. Pallbearer definitely tapped into that for me. I felt instantaneously connected to each riff and sludgy chord. I can tell you without a shadow of a doubt, this band is mainly responsible for so much of the music I have discovered in this journey with my husband over the past three years. It’s clearly felt personal to me and I am sure, with all the recent hype, that I am not the only one who enjoys dwelling in the despair.